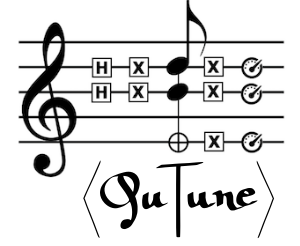 Quantum computing is a nascent technology, which is advancing rapidly.

There is a long history of research into using computers for music since the 1950s. Nowadays computers are essential for the music economy. Thus, it is very likely that quantum computers will be used in the music industry in the time to come.

A new area of research and development is emerging: Quantum Computer Music.

Historically, it is fair to compare state-of-the-art (i.e., at the time of this writing, 2021) quantum computers with the computer mainframes of the 1950s. And it must have been hard for our forefathers of the last century to predict how computers would evolve. For example, in 1977, Ken Olsen, co-founder of Digital Equipment Corporation (a major American company in the computer industry from the 1960s to the 1990s) allegedly said: “There is no reason for any individual to have a computer in his home”. Yet, we wear computers on the wrist today.

It is equally hard nowadays to imagine how computers will be like in 2090. But in contrast to 70 years ago, however, today’s musicians are generally conversant with computers and programming. So, the time is ripe for musicians to start experimenting with quantum computing in music, and play an active role in the development of this fascinating technology. There is every reason to believe that quantum computers will do wonders for musical creativity. Hence the QuTune project.

This page is a portal to programming tools, demonstrations, publications and other materials produced by the QuTune team.

The funding is now long gone, and it has not been renewed. But the University of Plymouth team is carrying on the activites and forging collaborations with a number of partners to continue developing and promoting research in this area.

The ICCMR offers opportunities for post-graduate research in Quantum Computer Music through masters and Ph.D. programmes.